What happens when you have been granted indefinite leave to remain in the UK in one identity and want (or need) to apply for a replacement document confirming your status in a different identity?

When a person is granted indefinite leave to remain in the UK (ILR) they are issued with a document confirming their status as a settled person. Currently this document is a biometric residence permit (“BRP”); previously it may have been a No Time Limit vignette in a passport or on an Immigration Status Document. Once their original document expires or is no longer valid they can apply for a new document. If their identity now is the same as their identity at the time ILR was granted then they should not experience too many difficulties; however, if their identity has changed, particularly if the original identity is (or is believed by the Home Office to be) false, there can be difficulties. A recent decision of the Upper Tribunal suggests that for some people these difficulties may be a thing of the past; however for some people the potential difficulties are likely to become more severe.

There are several reasons why someone may be granted ILR in one identity and then request a document confirming their grant of ILR in another identity, many of which (such as a change of name following marriage or divorce, by deed poll, or in relation to the protection of vulnerable witnesses and victims, or to correct an administrative error of the Home Office) are entirely legitimate. If both the original and the new identity, and the reason(s) for the change, are properly documented it may be possible to apply for a BRP in the new identity without too much difficulty.

However, the starting point under the current Home Office policy is to refuse to issue a new BRP where there has been a change of identity following the grant of ILR:

“The Home Office (HO) will not normally issue a document in a new identity where a person has either directly, or indirectly, obtained the document using a fraudulent identity. NTL applications that have been submitted under an identity which differs to that under which the applicant was granted ILR will usually be refused, unless the change is in relation to an accepted legitimate and documented change. Legitimate changes may include change of name by deed poll, statutory declaration, or following marriage.”

Under this policy, unless the Home Office are satisfied that the change of identity is legitimate (and applicants may unwittingly overestimate their ability to satisfy the Home Office) they will simply refuse to issue a new biometric residence permit. They are also likely to retain the passport or travel document submitted with the application for further investigation.

The default position of the Home Office is therefore that all changes of identity are illegitimate unless proven otherwise to their satisfaction. The implication of this approach must be that the Home Office consider at least one of the identities (usually the original identity) to be false; however, unlike other immigration applications, nothing in the policy indicates that any further action would be taken against the individual, other than failing to issue a new document. The practical effect of this is that the individual concerned would still have ILR (in their original identity), but “… would be unable to travel and might incur problems if immigration checks were made having regard to the differences between the identities set out in their ILRs and those in their passports.” The practical effects of such difficulties can include loss of, or lack of access to, employment, accommodation, driving licences, and banking services.

The purpose of the policy, as confirmed by a Home Office statement in the case, was to ensure that those who practice deception should not gain from that deception: to grant an application where fraud has been practised would “… effectively be to condone or reward deception refuse.” However, as already mentioned, the Home Office confirmed that such a person continued to have the ILR that had in fact been granted.

It was this apparent inconsistency which prompted the Upper Tribunal, in the recent decision of R (on the application of Huang & others) v Secretary of State for the Home Department (“No Time Limit” Transfer: Fraud) IJR [2015] UKUT 00662 (IAC), to find that the policy was not justifiable as it created a “… wholly unsatisfactory situation.” The case concerned five Chinese nationals who had sought to change, to a greater or lesser extent, their names and / or their dates of birth. The case has implications for individuals of all nationalities, and indeed of none.

The Upper Tribunal confirmed that it was entirely reasonable and understandable for the Home Office not to issue a BRP in a different identity unless the change in identity is an accepted and legitimate one; however it was “… wholly unsatisfactory” that for the Home Office to ruin an individual’s life with a mere suggestion of fraud or deception, without having to substantiate that suggestion. Crucially, the Home Office accepted that even where they were sure that the original grant of ILR was obtained by fraud or deception it remained valid – it was just that the individual concerned would find it increasingly difficult to exercise any rights associated with that grant.

The effect of the Huang decision is to challenge the Home Office to take the action that their concerns demand. If they are satisfied that the original grant of ILR was obtained by deception they should go on to consider whether or not to revoke the ILR. This would in turn involve notifying the applicant of the need to demonstrate why ILR should not be revoked, requiring them to put forward their reasons for providing false information and why, notwithstanding any deception, ILR should continue. Otherwise, the Home Office should issue a BRP: “… simply to leave the ILR in being but to refuse the NTL is not justifiable.”

The Upper Tribunal considered that this approach would “… make it clear that … fraudulent practices would not be endorsed” and should be followed in all cases “… where it was believed that ILR was tainted by fraud.” Given the already deliberately hostile environment for migrants, that the new identity in one case involved a change of date of birth by just three days (and a claimed lifetime celebrating the birthday on the original date), and that one case was supported by a deed poll and a new passport (albeit that the passport predated the deed poll by some months) individuals who need to submit this type of application should expect close and anxious scrutiny of their application and should not expect a quick, or favourable, decision.

For some people, particularly those issued with a BRP, this decision may provide a welcome route out of legal limbo; however for many it may lead to further periods of uncertainty, lengthy Home Office decision making, and, ultimately, the risk of the loss of ILR and removal from the UK.

The current policy does however, provide hope for those who have provided the correct information before the grant of ILR. As ever, a well prepared and documented application may be invaluable.

If you would like advice or representation regarding your immigration matter, contact our immigration barristers & lawyers on 0203 617 9173 or via our online enquiry form. 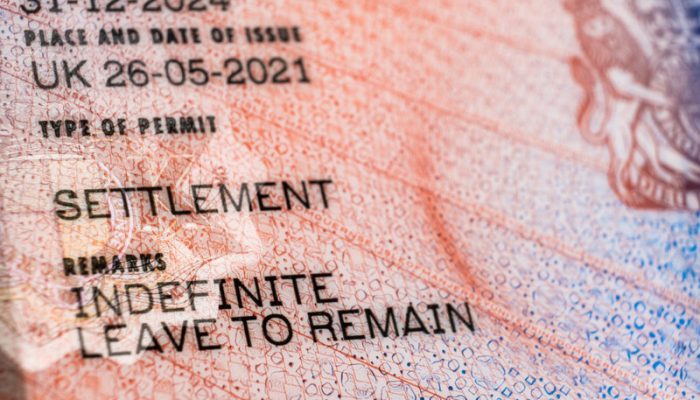